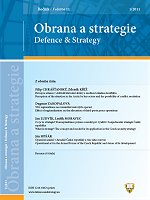 Summary/Abstract: The article is focused at the most important elements of the US foreign policy towards the Middle East during the administration of George W. Bush (2001 – 2009). The text has two parts. The first part shows three important influences on creation and formulation of the US foreign policy towards the region. At the first place it was an effort to preserve unipolar character of the international system, hegemonic possition of the USA and its dominance in all regions. The second source was specific decision-making process set up by president Bush and the third source of the Bush strategy was a partial transformation of the US longtime policy towards the Middle East. The second part of the article discuss results of the Bush doctrine in the region. The text is focused at five most important consequences of the US foreign policy, which are the fight against proliferation of weapons of mass destruction, the pursuit of the democratization throughout the region, the Israel-Palestinian conflict, regional “cold war” between Iran and Saudi Arabia and finally the struggle to stabilize the post-conflict Iraq.