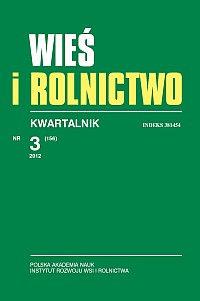 Summary/Abstract: Nowadays the formulation of a single, coherent definition of the “countryside” poses a serious problem. A modern researcher of rural issues has to decide whether he intends to deal with “rural community” or “rural area” for, as it is stressed by Gorlach [2004], each of these notions involves a different perspective. The same notions are interpreted in a slightly different, way by sociologists, economists, geographers and also researchers from individual countries. Sociologists (including Mormont, Hoggart, Buller [1987] and Kaleta [1998]) point to various planes of formulation of definitions of the countryside. The author of the article tries to analyse changes in the ways of defining the countryside that have occurred since the days of Grabski. The diversification and the high rate of changes taking place in the countryside make it so hard to formulate its definition that some researchers suggest the use of the notion “rural” ought to be abandoned. Halfacree suggests that it would be proper to use the category of post-rurality. The question of defining the notions “countryside”, “rural” and “rural area” is important to scientists because, as it was pointed out by Nowak [1985], the examined notions ought to be defined in a way making their content and scope clear for a person conducting research.