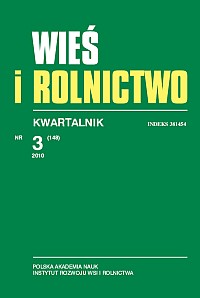 Summary/Abstract: The paper has been prepared within the framework of an international research project designed to explore on the example of the programme LEADER the implementation of a new concept of rural development in the new member-states of the European Union. The paper presents an analysis of the implementation – carried out in two stages, of the Pilot Programme LEADER+ and of the Fourth Axis of the Rural Development Policy in the 2007-2013 financing period. The implementation of the Pilot Programme LEADER+ resulted in the establishment of some 250 local action groups which were joined by about 40% of all communes. At this stage a model of operation was shaped, with the Minister of Agriculture and Rural Development assuming the function of a managing institution, with FAPA (Foundation for Programmes of Assistance to Agriculture) assuming the function of an executor and the Agency for the Restructuring and Modernisation of Agriculture assuming the function of a payer. Some changes occurred in the 2007-2013 period when compared with the previous period. The programme LEADER became the fourth axis of the Rural Development Policy and its implementation became obligatory for every EU member-state. In connection with this fact changes were introduced in the statutes and internal structure of Local Action Groups and in Poland the management of the programme became de-concentrated – its implementation was entrusted to voivodeship self-governments although the managing institution and the paying institution remained the same. Self-governments put emphasis on the formation of a network of Local Action Groups that would cover as much of the voivodeships’ territory as possible. There occurred a delay in the launching of the programme because the contests for LAGs started only in the third quarter of 2008. Agreements with 328 victorious LAGs were signed in the late spring and early summer of 2009. At present local development strategies implemented by individual LAGs are in various stages of advancement; in some cases the implementation of these strategies is seriously delayed.