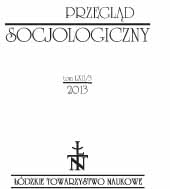 Summary/Abstract: The paper attempts to verify impact of UEFA Euro 2012 tournament that was hosted by Poland and Ukraine on traditional supporters’ communities in Poland. Applying the typology of football fans developed by Richard Giulianotti, it focuses on traditional fans. Article explores different strategies undertaken by the supporters towards Euro 2012. The event is analyzed from various perspectives: as a chance for change in Polish public discourse; as a trigger for moral panic and as a field of conflict between various social actors (professionals, players, supporters, media, etc.).