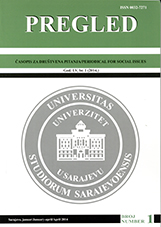 Summary/Abstract: Jews were forced to leave Spain in 1492, then, five years later, Portugal. They headed toward the Ottoman Empire along the coast of North Africa, but also sailing the sea. Their destinations were either Dubrovnik or Constantinople. From Dubrovnik, Jewish caravans headed to Constantinople, Thessaloniki, Edirne, Principality of Valona... The increase in settling in Bosnia started in the mid 16th. Some time later - in the 18th century, they established the community in Travnik, then in Zenica, Žepče and other major towns in Bosnia and Herzegovina. According to the evidence found in Sharia Court in Sarajevo archive, the oldest documents on arrival of Jews mention some Rafael, then Avram son of Isak in 1565, i.e. 973 Anno hegirae. In the wedding contracts (ketubah) from the 16th and 17th centuries (Gregorian years of 1578 and 1652; 5339 and 5413 according to the Hebrew calendar respectively) appear also surnames that are no longer present in Bosnia: Tobi, Cavalieri Cusi, Eliezer, Saba, Mule, Jeshurun, Curiel. In responasas to Thessaloniki Rabbi Haim Shabbethai dated 29 Adar 5394 (1633) entitled Sarajevo in Bosnia we find surnames: Zevulun, Makliam, Cacici, Lansana, Teseo and that Rosado already not existent in Bosnia. In Bosnia and Herzegovina the number Ashkenazy surnames surpasses Sephardic ones, primarily due to the wide area from which they came, and the fact that they went through a period when they were forced to change the surname or buy names having at least some dignity. For Sephardim it is different because the majority of their surnames was brought from Spain and Portugal, or provinces and the cities from which they had came, and their large influx was stopped at the end of the 19th century.