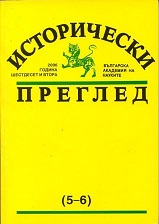 Summary/Abstract: The years after the Ilinden Uprising put to the test the overall work of the Exarchate in Macedonia. One of the levers by which the Ottoman authority tried to sabotage the process of consolidation of the Bulgarian element in the provinces was the principle of preserving the ecclesiastical status quo. After the uprising many villages started leaving the Patriarchate and passing under the jurisdiction of the Exarchate. That was an increasing trend which pushed to the fore the question of the ownership of churches and schools. For many years the problem remained unsolved by the government, whose policy was to maintain the idea of confrontation between patriarchists and exarchists. And after the Young Turk revolution of July 1908 the issue remained on the agenda, and the government continued to apply the familiar tactic of delay and transfer of responsibility in this case to the parliament. The decision was taken as late as the summer of 1910 with the adoption of the Law of contentious churches and schools. Although its provisions did not fully meet the legitimate expectations of Bulgarians, they regulated a solution to a problem which albeit artificially created and maintained by the government was quite pressing for the population in the provinces.