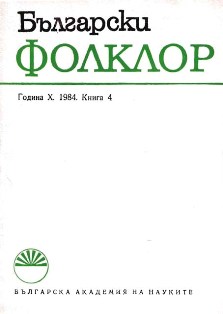 Summary/Abstract: The use of the denominations of „Franks”, „Latins” and „Germans” is traced in the present article and an attempt is also made at explaining their contents. The attitude of Bulgarian men of letters to western peoples appears to have been positive or negative depending upon their own political or religious stand. The denomination of „Franks” is not found in Bulgarian folklore, whereas mention is often made in it of Latins and Germans. The author cites examples and makes an attempt to penetrate into the historical reality which gave rise to these songs, while taking into account the processes of motif movements in folklore and the constant actualization of the latter. She makes the assumption that а rich epic tradition about the Crusaders must have emerged in Bulgaria during the 13th century, which later merged into the new 15th and 16th century heroic epos. The concept of „Germans” has been reflected in the songs at а historically later stage in connection with the wars between Austria and Turkey. The songs relating of а „German maiden” convey the idea of unity and mutual support between the oppressed peoples. The Bulgarian younaks are the ones to win under any circumstances – an ideal which is typical of the epos. The folk songs reflect the folk singer’s optimism, as well as humaneness and tolerance; the foreigner adhering to а different faith is not always а foe.