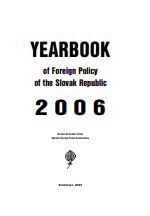 Summary/Abstract: In the past few years, the issue of EU institutional reform has been somehow connected with the document called The Treaty for Establishing a Constitution for Europe1. As for this document, it can be said that 2005 was a year of ratification while 2006 was a year of reflection. However, the ratification did not proceed smoothly. The Constitutional Treaty was turned down by the citizens of the two member states in referenda. However, the reflection period did not mark any progress either – new ideas did not appear and no acceptable solution to the ‘constitutional crises’ was developed. Thus even in 2007, the European Union rolls its institutional ‘boulder’.