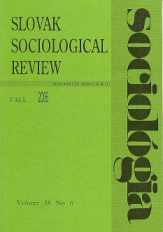 Summary/Abstract: European Integration and Ethnic Minorities: A Case Study on Hungarians in Slovakia. This paper examines the influence of European integration on the political and economical status of the Hungarian minority in Slovakia. Our study tests (and partially challenges) the dominant trend in the current scholarship in European and transition studies that claims the decisive influence of the European Union on minority policy and ethnic relations in Slovakia. These studies looked only at the national political elite level and usually neglected the local elite level. Moreover, they examined only “political conditionality” as the core strategy of the EU to promote “respect for and protection of minorities”. Such an approach neglected a possible impact of the accession process on the economic status and the political mobilization of the ethnic minority in mixed regions that could be stimulated by access to the EU accession (structural) funds. Therefore, we interviewed 31 political and social actors, representing ethnic Hungarians and Slovaks at the national and regional/local level (Košice region), which had professional dealings with EU institutions, funds or representatives. The main aim of these in-depth, semi-structured interviews was to reveal their perceptions to get deeper understanding of possible changes induced by the EU accession process on majority-minority relations in Slovakia. The paper generalizes respondents’ perception of “the EU impact” on: majority-minority relations, ethnic identity and socio-economic status. It argues that given the lack of an EU agenda and a special policy on minority protection beyond the vague Copenhagen criteria, effects of EU political conditionality in this field depends mostly on the organizational and political strength of respective minority, its articulation of demands, and on the coordinated action of other international organizations. In Slovakia it empowered the Hungarian political elite and promoted the power-sharing arrangement at the national level (1998-2006) that used to be the most conflicting arena. Paradoxically, access to EU funds has also promoted cross border cooperation among ethnic Hungarians in both Hungary and Slovakia, and did not (yet) affects the traditional patterns of cooperation and competition among ethnic Slovaks and Hungarians in Slovakia.