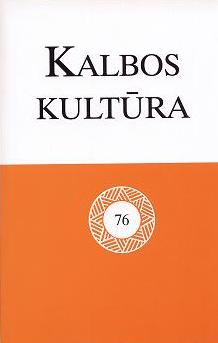 Summary/Abstract: The article deals with non-standart gramatical phenomena and their evaluation. The general feature of such issues is their non-compliance with the laws and rules of standart Lithuanian and the fact that they are not codified as a norm of the standart language. Non-standart gramatical phenomena can be divided into two groups. One group covers obvious and gross violations of the norm, language mstakes that must be rectified. Usually the phenomena violate the grammatical system of Lithuanian mainly throuhg foreign languages and also by some narrowly used dialectisms occasionally slipping into standart ussage. The second group of non-standart gramatical phenomena includes minor violations of the norm, which for a variety of reasons cannot be considered as gross mistakes. They are usually intermediate, transitional cases between the norm and the violation. The main reasons of their occurrence are concerned with unfavourable tendencies of standart Lithuanian influenced by other languages and the undefined status of some features within the language itself. The phenomena that have received little attention from the researchers and those causing contradictory views should not be given very strict evaluation.