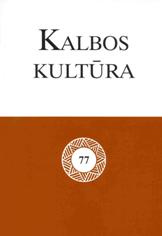 Summary/Abstract: The paper deals with the variable expression of state by adjectival words with some verbs. The research has been based on the data collected from the web (searched with Google) and the Lithuanian language corpus of Vytautas Magnus University and applying the statistical method. There have been three groups of verbs identified in terms of the norm. The classification has been supported by statistics. The three groups are as follows: 1. Verbs which combined with state adjectival words in the instrumental case constitute a gross violation of the norm, e. g. būti, pa(si)daryti, atrodyti, tapti etc. (Eng. 'to be, to make/become, to seem/look'.) 2. Verbs which combined with state adjectival words in the instrumental case are within the fluctuating, variable norm, e. g. (pa)skirti, (pa)skelbti, pripažinti (Eng. 'to appoint, to announce, to acknowledge'.) 3. Verbs which combined with state adjectival words in the instrumental are within the norm, e. g. laikyti, (pa)vadinti, (pa)versti, (pa)virsti (Eng. 'to consider, to take sb. for, to turn (into)'). It was established that norm fluctuations in the usage of the second group of verbs are less frequent than indicated in the works on standard language and the norm. In this relation, it should be pointed out that the instrumental case is not quite stable as a norm; however, other alternatives in the same position (nominative and accusative) cannot be treated as equal substitutes. Despite the limited reliability of statistics, which cannot serve as the sole criterion of variable norm identification, it can still facilitate the identification and substantiation of actual usage tendencies.