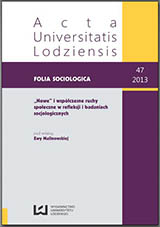 Summary/Abstract: In the following article we argue: firstly, that it’s necessary to take into account in social movement studies, the anthropological ideas of the “Self”, as well as the political views of public sphere’s eidos. We do this in reference to German philosopher Helmuth Plessner ‒ a think- er that is relatively little known for social movement theorists. Secondly, we analyze ‒ following Plessner ‒ the concept of social radicalism and the idea of radicalism as such. We are looking for its meanings and values that have been lost in the common and trivialized discourse, or were attributed to it in an exaggerated way. We don’t agree with the false use of the term “radical” in relation to the ordinary forms of vandalism, stupidity and xenophobia. Thirdly, we try to formulate the princi- pals of the “sociology of radicalism” which for sure require further examination. In opposition to the wide-spread beliefs, we consider radicalism as substantially an open stance, fulfilled with a sense of lack, unsatisfaction, regret and hope. We see in a fair radicalism an attitude that accepts strange- ness and as such it’s fundamentally different from extremism or fundamentalism. Finally, we see in it a phenomena singular for small groups, which remain in transition, and standby on borders.

The impossibility of Multiculturalism – Modernity and Politics The impossibility of Multiculturalism – Modernity and Politics 2013 Miłość i lęk: przyczynek do zagadnienia małego państwa Love and Fear: Contribution to the Issue of a Small State 2015 Agon i higiena. Nieposłuszeństwo obywatelskie a sfera publiczna Agon and hygiene: civil disobedience and the public sphere 2015 Prawa Człowieka - między krytyką i apologią europejskiego modelu politycznego Human rights – Between Criticism and Apology of the European Political Model 2016 RADICALISM AND MODERNITY RADICALISM AND MODERNITY 2017
2022 © CEEOL. ALL Rights Reserved. Privacy Policy | Terms & Conditions of use
ICB - InterConsult Bulgaria core ver.2.01115