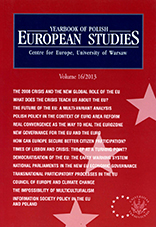 Summary/Abstract: The politics of multiculturalism today raises scepticism not only among ordinary people, but also of the European political class. In times of crisis it offers an excuse for various hasty and often outrageous decisions. The proposition of French President Nicolas Sarkozy in 2010 concerning the mass deportations of Romani people residing in France is certainly one of them. Yet, this problem cannot be simply reduced to a particular, more or less reasonable political decisions neither result merely from current situation. The crisis is also closely related to the conditions of contemporary political practice and the shape of the public sphere. This article aims to shed some light on this issue in terms of H. Arendt’s philosophy. We examine the possibility of multiculturalism in a society subjected to the forces of science, capitalism, and the doctrine of the Rights of Man. We assume that where politics ceases to be a living practice based on dialogue and confrontation of diversities, and grounds itself in the realm of necessities, a peaceful multiculturalism becomes simply impossible.