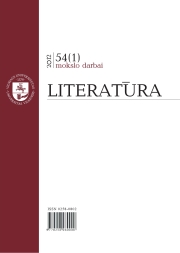 Summary/Abstract: The article analyses the issue of historical memory in Fabijonas Neveravičius’ (1900-1981) historical novels Blaškomos liepsnos and Erškėčiai in the context of the Lithuanian and Polish historical literature. On the basis of the theory of collective memory, the writer’s attitude towards history as well as the ideas and values he represents are revealed, at the same time making an attempt to explain the origin of his ideas and judgements. In his novels, F. Neveravičius presents a historical representation of the Polish–Lithuanian Commonwealth collapse and the November Uprising (1831). It shifts the boundaries of memories about the Lithuanian history by introducing the events and characters of the period which often tends to be forgotten. He highlights the deeds of feudal lords in the Lithuanian history and states that their realm and culture is an inseparable part of the Lithuanian nation. F. Neveravičius’ novels partially correspond to the Polish historical literary tradition due to their subject matter, interpretation of historical facts and the developed characters. However, he interlinks the tradition with the judgements rooted in the memories of the Lithuanian history.