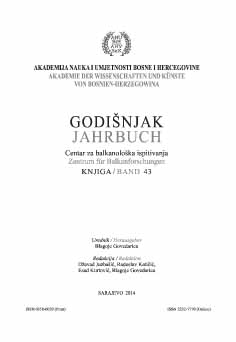 Summary/Abstract: The earliest traces of imported goods from the Mediterranean south are typical for Glasinac plateau. During the eighth century BC there was a rise in livestock aristocracy in Glasinac area. Prominent individuals were able to mobilize larger labor force for the construction of public facilities, as well as to show their power through the ownership of prestigious items. One of the markers of the new ruling class is the emergence of imported metal vessels, which is a theme to be discussed in this paper. Parts of metal vessel sets were found only in grave assemblages dated from the early 7th century to the end of the 5th century. Besides being the distinctive grave goods found in princely graves, from the 5th century they become a part of the inventory of luxury warrior graves of Glasinac area. Most of the imported metal vessels from Glasinac were produced in south Italic and /or Etruscan workshops. tte r e were two main forms of distribution of goods from southern Italy and Etruria: direct trade and exchange with local communities along the coastline and/or trading through colonial intermediaries on the eastern coast of the Adriatic Sea. The first model whereby the imported material came directly to the local communities without an intermediary is less likely. The fact is that there is no evidence yet of the large settlements of indigenous population with a capacity to accept goods and carry out further redistribution. This , clearly, does not imply the inferior position of the local communities. Nevertheless, the social structure itself and the economic strategy of the early communities of the Iron Age on the east coast of the Adriatic Sea were not focused on the urbanization or creation of a wide network of monopoly over trade and exchange. A direct contact would have indicated much more imported finds among the local aristocracy's grave goods, which was not the case. The number of imported finds is very small on the Adriatic shoreline and in the immediate hinterland when compared with the Glasinac plateau and further inland. The model of colonial intermediary is a more probable answer to the question where the goods from Italic centres ended up. Along with the Italic imports somewhat bigger in number, the Greek continental goods included mainly phialae and cups. The origin of imported objects found among the "barbarians" in Glasinac is mostly interpreted through their economic activity, with a strong Greek economic and social component bringing changes to the barbaric hinterland. These postulates were later criticised by researchers. Although the imported objects played an important role in defining the social prestige, they did not have power to shape up or change the existing social and political relations. Imported objects represent the symbolic power of the chief, his status and economic position, but not the origin of his power and status.