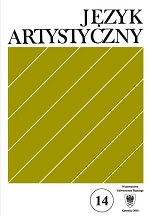 Summary/Abstract: Considerations included in the article concentrate on various literary and/or paraliterary reproductions of a handbook. They derive from the observation of works (among others by Krystyna Kofta and Joanna Chmielewska) which refer to various aspects of a genre pattern typical of this form of speech and, what is important, go beyond this pattern. The author tries to decide why (who) such text-forming moves serve. She also confirms the hypothesis (already presented many times) that reversing the genre rules, that is, putting to the test the already existing habits of the receivers, the subject of the expression makes them to critically commune with the very code of the book. In the light of the observations presented, it goes beyond a doubt that all games with a how-to (and not only) convention prove its expertise, as well as perception. The existence of a clear how-to style — at least at this stage of genre evolution — is not by any means determined.