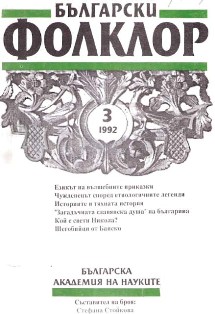 Summary/Abstract: The concept of soul gets formed in the context of a certain culture. This poses the question of the metalanguage used for scientific description of psychic phenomena. The diachronic analysis demonstrates that the Bulgarian word for soul – “dousha” (connected with the breathing, air, wind) – is not the only one used for marking psychic phenomena in the pre-Christian context. Folklore materials show up the perception of a “wind”, “air” world, which is parallel to the real one. Hen and wolf play the role of mediators between the real world and the “wind” one. The folklore texts examined, which have bearing with the hen, are two types that can be partially formalized as follows: “hen’s body” “wind” (conjunction) and “dead” “alive” (implication). Related to its “wind” nature are the soul’s manifestations through smells and herbs, fixed in the phraseology of Bulgarian language, as well as in the ritual practice. In the diachronic analysis it is clarified that the terms for angel, devil, rabies, shadow, measure have relation with the concept of soul, and also the element *-men in the common Slavonic neutral of *-men stems, which are here regarded as composits. These words are ime (name), zname (banner), seme (seed), breme (burdon), vreme (time). The word streme (stirrup) is not included because it is a later cultural fact. The perception of tempus has special significance and reflects the successive appearance of creatures coming from the real and the “air” worlds in the round-the-clock cycle.