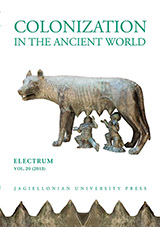 Summary/Abstract: The Ptolemaic colonisation in Asia Minor and the Aegean region was a signifi cant tool which served the politics of the dynasty that actively participated in the fi ght for hegemony over the eastern part of the Mediterranean Sea basin. In order to specify the role which the settlements founded by the Lagids played in their politics, it is of considerable importance to establish as precise dating of the foundations as possible. It seems legitimate to acknowledge that Ptolemy II possessed a well-thought-out plan, which, apart from the purely strategic aspects of founding new settlements, was also heavily charged with the propaganda issues which were connected with the cult of Arsinoe II.