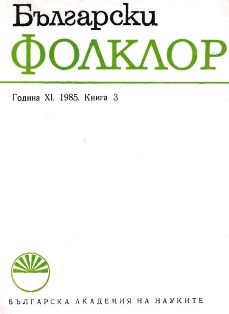 Summary/Abstract: The paper examines some problems which come to light when one compares the Finnish epic tradition and the Bulgarian folk epos. One of the things we observe is the fact that the two types of epos existed in different forms and circulated in different ways. Unlike “Kalevala” which unites into one all Finnish runes, the Bulgarian folk epos continues to exist to this very day as separate works in spite of the obvious tendency of most of them to fall into cycles, unified by the main epic hero Krali Marko. An attempt has been made to explain this by the specific nature of our epics which differ considerably from the Finnish epic tradition. This difference manifests itself above all in their different atmosphere. While the picture presented in “Kalevala” is one of peaceful life and labour, in the Bulgarian heroic epic it is one of struggles and battles. On the other hand, compared with the relative unity of the Finnish epic, the Bulgarian heroic songs are characterized by their variety of levels of existence and by their contradictions. The paper analyses the mythological layers of the Bulgarian epic which differ from the aetiological nature and the Promethean spirit of the Finnish runes in that it describes the hero’s struggle for the recovery of something dear to him (wife, water, etc.). A later stage in the development of the Bulgarian epic is represented by heroic epic songs. Because of their historical vagueness the heroic nature of the struggle in them is stressed; it is usually presented as a fight between the hero and his opponent with the purpose of establishing who the greater hero is. The most recent stage in the development of our epic is represented by songs treating heroic and historical subjects. They tell of the epic hero’s struggle against the Ottoman invaders and oppressors who kept Bulgaria in subjugation for five centuries. The complex development of the Bulgarian nation and its emergence as an ethnic unit is the main factor which explains the multi-stage character of the Bulgarian epos; it also explains the contradictions in it and why the Bulgarian people was deprived of the possibility to create its own epopee, its “Kalevala”.