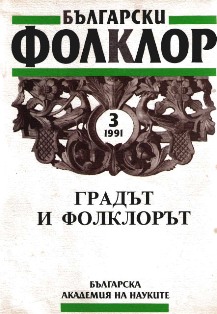 Summary/Abstract: The change in the political situation in our country after the l0th November 1989 was the event that liberated speech and gave a blow to a flew process of creation in Bulgarian mass culture, unique in its unlimited frankness and in the strength of the political protest. One of these forms of creation are slogans; vocal and written, produced by the participants in different political meetings, demonstrations, processions etc., organised by the UDF, BCP (BSP), by formal and non-formal organisations. The article studies the communicative function of slogans in the context of meetings and other mass movements. The author tries to prove the existence of a similarity between meetings and traditional rites. That idea is developed on the base of the analysis of the spatial-temporal categories, of the meetings participants’ behaviour etc. The contents of the slogans are supposed to correspond to the type of the meeting. Without being genetically connected to some of the traditional folklore forms, the slogans show some of the stereotypes of ritual behaviour and expression which in similar situations lead to the same forms of expression. Examples are used to illustrate the variety of slogans aiming at different emotional effects.