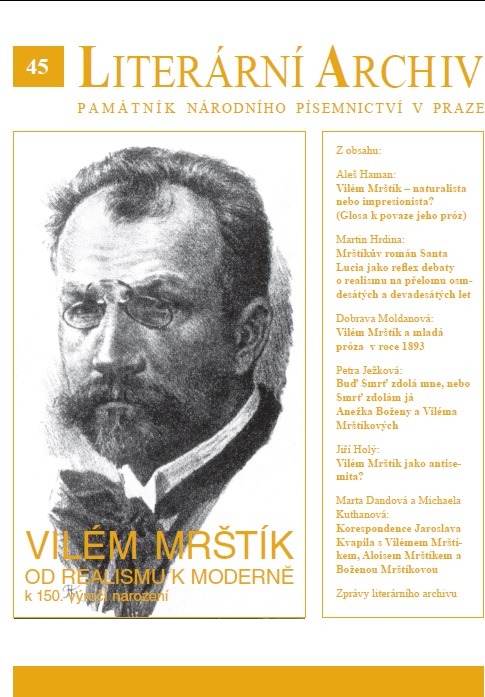 Summary/Abstract: In this article, the author uses the novel Santa Lucia (1893) by Vilém Mrštík (1863–1912) as an example to identify and explain a key change in Czech literature in the late 1880s through the 1890s. He does so by looking at the mass reception of contemporaneous non-Czech literature, and at the accompanying criticism and discussions of theory. The article is not an attempt to answer the question of how much Santa Lucia comports with the principles of contemporaneous programmes of Realism in literature; instead, it seeks to identify and explain the various relations between this novel and other works, contemporaneous and earlier, which, when written, were, for various reasons, considered Realist. In this way, the author hopes to help clarify the definitions of the various historical conceptions of Realism in literature. The article is therefore primarily focused not on what is depicted in Santa Lucia realistically, naturalistically, or impressionistically as ‘beautiful’ or ‘ugly’, but instead focuses directly on the technical side of the approach to reality, particularly when observation itself is the topic, and Realism is drawn into contemporaneous perceptions of painting and photography as sources of inspiration for the creation of works of literature.