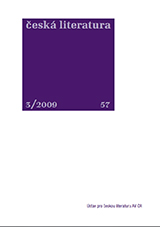 Summary/Abstract: In this article the author considers the use of the term ‘Romanticism’ in the critical -historical discourse that constitutes the study of German and Czech literature, with the aim of establishing the specifi c causes of the inconsistencies in the term. Like the philosopher Ladislav Hejdánek (b. 1927), the author sees the term as cross -section of judgements, and after analyzing German- -studies models of Romanticism (Heinrich Heine, Hermann Hettner, Franz Thomas Bratranek, Rudolf Haym, Wilhelm Scherer), he explains it as a junction of judgements and comparisons of Romanticism to subjectivism, historicism, Roman Catholicism, idealism, aristocratism, and patriotism (nationalism). He also considers the employment of the term in critical -historical thinking on modern Czech Romanticism, from the models of Karel Sabina and Eliška Krásnohorská to the comparative viewpoints of Wiktor Czajewski and Matthias Murko, and all the way to a representative synthesis of the history of Czech literature in the fi rst half of the nineteenth century. The origin of the term in critical practice turns out to be problematic, particularly in the works of the Czech positivists, for example, in pejorative terms like rytířská (chivalrous), klášterní (monastic), and vlašská romantika (pastoral romance), whose function was, in keeping with the understanding of Czech Romanticism as eclecticism, to explain some Czech literary texts (particularly popular literature) from impetuses arising outside the national culture. In positivist models of Czech Romanticism one may legitimately talk even about interferential meanings of words and terms, which manifest themselves negatively in interpretations of canonical texts as well. The discrepancies and ambiguity of the term ‘Romanticism’ as early as in the syntheses of Czech positivists may be explained as a consequence of the variety of judgements on Romanticism, which were based, moreover, on non -literary facts.