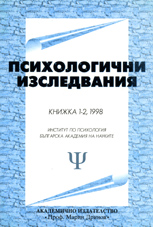 Summary/Abstract: The problem of ethnic interrelations is discussed in the frame of work of social changes taking part in Bulgaria today. The anomy is revealed as a present state of Bulgarian society. Four ethnic groups are investigated - Bulgarian, Turkish, Jewish and Armenian, in concern with their individual and group normative behaviors, social attitudes and social distances. The hypotheses about the increase of destructive and deviant behaviors, as well as the decrease in the regulative function ofsocal norms in all ethnic groups are proved. In comparison with the interpersonal relations among people, belonging to one ethnic group, stronger negative attitudes and greater social distances characterized interethnic group relations. Jews appeared to be the most adaptive ethnic group with no significant differences with Bulgarians. The unexpectable results are connected, on the one hand, with Armenians, whose social group significantly differs with all other ethnic groups. On the other hand — Turkish subjects show the highest level ofsocal norms behavior guidance. On the base of the results, we could conclude that a new interethnic equilibrium exists now in Bulgaria and the fear of appearance of dangerous ethnic conflicts is first of all a political speculation, than a real possibility.