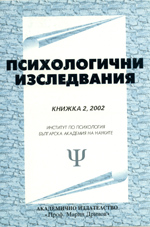 Summary/Abstract: The article presents results from a study concerning two major problems: First, we studied media orientations of young people toward traditional mass media — TV, radio broadcast, print, and the Internet. Second, we were searching for explanatory models of the existing specific attitudes toward violence in mass media and aggression connecting them to individual cognitive styles and locus of control The sample included 154 students in mass communication majors from New Bulgarian University and University of Sofia. Results show the leading position of TV, second rank for radio, followed by Internet and print, both — newspapers and magazines. Factor analysis results proved the existence of three types of attitudes toward violence in mass media: two of them formed the end-sides of the continuum — pros and cons, and the third one expressed somewhat a tolerance toward "media violence". Forth factor reflected subjects' trust in mass media. The hypothesis about a correlation between specific attitudes and cognitive styles was proved. The other one — between attitudes toward violence in mass media and locus of control was rejected. In the summary we made also a comparison between some of our results and those received in a similar study conducted by two Russian authors.