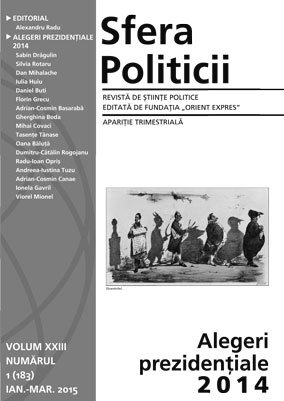 Summary/Abstract: Throughout this study, we are presenting a proposal to highlight the main reasons which led to Klaus Werner Iohannis winning the presidential elections in 2014, and we are also analyzing one of the situations that identifies the standpoint of the former mayor of Sibiu towards the condemnation of communist past. A symbolic gesture of disapproval of the communist crimes, which led to controversy in the public opinion, was also the decoration of the former political prisoner Octav Bjoza with the National Order „Star of Romania“ with the rank of Knight; but this event underlined Iohannis’s great respect towards those who suffered in the communist prisons of Romania. Sustaining the founding of a museum of communism and also the visit to the National Council for the Study of the Securitate Archives (CNSAS), represented moments that denoted, on the one hand- the condemnation and the assuming of communism, and on the other hand-the fact of „always remembering“ and „the obligation not to forget“ the dramatic events of that time period.