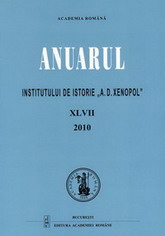 Summary/Abstract: The official periodical of “A. D. Xenopol” Institute of National History, “Studii şi Cercetări Istorice” (Historical Studies and Researches) was one of the leading specialty Romanian magazines in the period between the two world wars. The documents found in the Central Historical National Archives and the collections of the Ministry of National Propaganda testify for the extremely difficult situation in which the last two volumes of the journal, the 19th and 20th editions, were published. In March 1948, in the eve of the policy for cultural regeneration and reorganization of the Romanian scientific life set up by the new regime, the magazine was closed along with several other cultural and scientific periodicals in Romania.