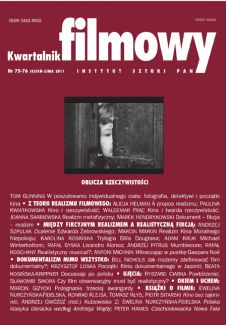 Summary/Abstract: The author defends the notion of two opposing types of film: documentary and fiction film. He is aware of the fact that the scope of those types of films overlap, and the viewer often has to deal with hybrid forms, and yet Hendrykowski considers this duality to be part of cinema itself. Films based on facts and films based on fiction fill the entire genological space of the cinema, co-creating – from the very beginnings of cinematography up till now, the foundation and code for the reception of each and every means of communication through moving image. However, one has to keep in mind that both types are necessary for the existence of each other and are continually renewed through mutual dialectic dialogue. Hendrykowski proposes a different approach to the study of the relationship between the documentary aspect and fiction in film – he believes that descriptive studies of the poetics of film work conducted with the type and genre of the film in mind should have its equivalent in the complementary studies of historical poetics. The genology of film must not be limited only to the synchronic perspective, but must also include the diachronic one. Films based on facts and fiction films are concepts of variable extent. In different historical periods they may mean something else. Various ties between document and fiction on screen are not based on an imposed doctrine. The relationship between them is dynamic and constantly evolving. The only constant is the polar opposition between them that occurs in the process of communication. Hendrykowski examines various models of the relationship between these types of films, and offers new tools and concepts useful for their analysis.