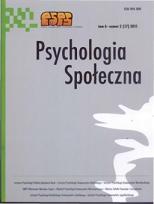 Summary/Abstract: The Right-Wing Authoritarianism Scale (RWA), developed by Robert Altemeyer, is the most popular measure of authoritarianism. According to many critics, RWA scale measures mostly conservative-traditional ideology, characteristic for the radical Right. Such opinion is inconsistent with Altemeyer’s position, who clearly distinguishes between authoritarianism and conservative ideology. However, if it was true, it would also run contrary to basic principles of scientific reasoning. Researchers could not be certain whether their conclusions, drawn from the RWA score, concern authoritarianism or the right-wing worldview. The author made an attempt to answer the doubts by analyzing the – fundamental for the theory of authoritarianism – relationship between RWA and ethnocentrism. He presents several analysis based on data from a survey conducted on the random sample of adult Poles (N = 400). The results show that cumulative effect of rightwing ideology contained in RWA explains 60 percent of the RWA variance, with the remaining 40 percent due to effects of non-ideological factors. Further analyses prove that the right-wing authoritarianism cannot be seen as the main source of the ethnocentric in-group bias and out-group hostility. It seems then that it is not the RWA but the contained in the RWA large loading of the conservative-traditional world view which is responsible for ethnocentric attitudes. In the light of the presented results one may claim that the utility of the RWA scale is doubtful.