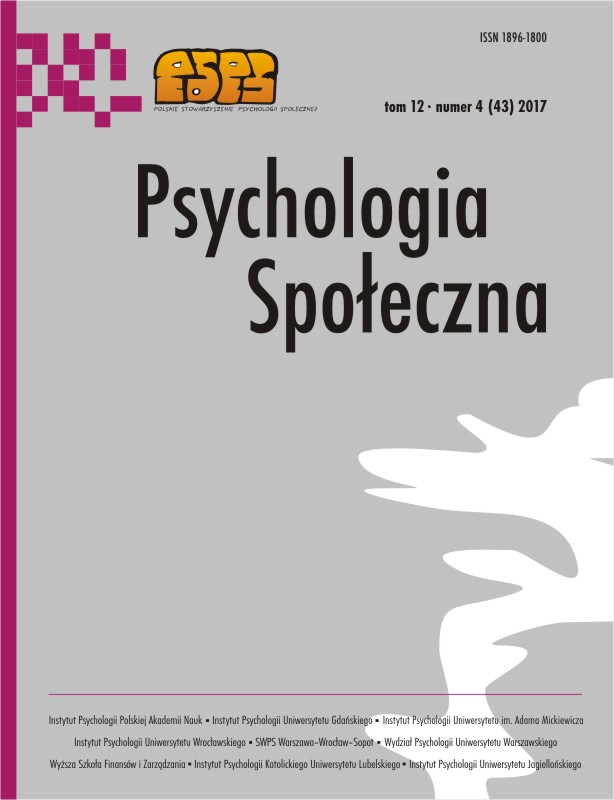 Summary/Abstract: This article presents the results of two experimental studies on the perception of aggression in the public political dispute about the procedure of in vitro fertilization. In both studies, experimental procedure was preceded by measurement of participants’ opinion on the in vitro. In the second phase, in Study 1 (N = 223) the Darwinian vision of the social world was primed, and in Study 2 (N = 240) social norm of aggressiveness was primed. Next stages of the experimental procedure were identical in both studies. All participants listened 8-minute recording of the public dispute two parliamentary deputies, which was supposedly a fragment of a radio broadcast. In fact, the recording was prepared on the basis of arguments and offensive words, often repeated in the turbulent disputes between politicians. Each participant listened to one of the four versions of the recording. The versions differed with respect to the direction of initiated aggression (against a supporter of the in vitro procedure or to its opponent) and the form of victim’s response (without or with aggressive response). The dependent variables were the overall approval of aggression in politics and assessment of politicians involved in the dispute (assessments made on the dimensions of wormth, competence and aggressiveness). Analysis of the results showed, inter alia, that: (a) aggressive politician definitely lose in the eyes of the observer against the victim of his aggression; (b) if the response of assaulted politician is devoid of aggression, he/she is judged better than when responds aggressively; (c) politician involved in a public dispute whose position is identical with the opinion of the observer is judged much better than politician with the opposite position; (d) the availability of cognitive pro-aggressive beliefs activates thinking in terms of social differentiation, group division created on the basis of differences of opinion, and, in effect, it exacerbates the processes of in-group favoritism.