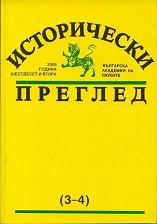 Summary/Abstract: This paper focuses on the integration of Northern Dobrogea into Romania, which is celebrated in Romanian historiography as the second stage of the creation of the national and unitary Romanian state, after the 1859 union of Wallachia and Moldavia. From this perspective, the mechanisms of assimilation used in Dobrogea by Romanian political elites prefigured the more complex and arduous process of administrative integration and cultural homogenization that took place in interwar Greater Romania. The paper argues that Northern Dobrogea served as a kind of “Internal America” for Romania’s dynamic frontier zone for expanding the national economy and ethnic boundaries. The integration of the province into Romania followed therefore the model of .internal colonialism:. in order to foster the incorporation of the province, Romanian political elites designed a threefold mechanism composed of ethnic colonization, cultural homogenization and economic modernization. This mechanism had at its core the citizenship legislation: despite its formal incorporation into Romania, Northern Dobrogea was subject to a separate administrative regime between 1878 and 1913. Under this status, the Dobrogeans enjoyed a local type of citizenship, which denied them political participation and the right to acquire properties outside the province. This analysis focuses on the mechanism of assimilation implemented in Dobrogea by the Romanian political elites. The first part explores the formation of the Romanian nationalist discourse about Dobrogea, and its influence on shaping citizenship and property legislation in the province. The second and main part of the paper investigates the integration of Dobrogea into Romania at the following levels: administrative organization, ethnic colonization, and cultural homogenization. Special attention is devoted to the effects of citizenship legislation on the province.s ethnic assimilation into Romania. The third part explores the association between national consolidation and modernization, and its side-effect, namely the relationship between Bucharest’s excessive centralization and regionalist tendencies in Northern Dobrogea. The fourth part examines the process of political emancipation of Dobrogeans. In conclusions some specific characteristics of the process of nation and state-building in the province are highlighted, in an attempt to add the complementary case-study of Northern Dobrogea’s pre-World War One assimilation to the broader framework of administrative integration and cultural homogenization in interwar Greater Romania. Theoretically, the paper builds on recent neo-Weberian approaches to the study of nation-state and citizenship.