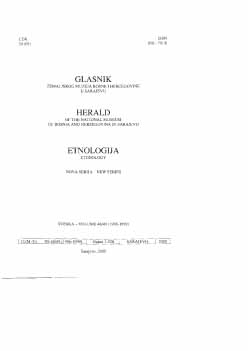 Summary/Abstract: The paper titled Ferhadija Mosque in Banja Luka and its Vakif in Hitrory and Traditon is based on the survey of historical circumstances of life and work of Ferhad-Pasha Sokolović, the last Bosnian Sandžak-Bey (1574-1580) and the first Bosnian Beylerbey (1580-1588), a brilliant military commander and statesman whose conquest mostly defined the western borders of the Ottoman Empire, and at the same time the borders of Bosnian Vilayet whose size at that time exceeded even the size of Tvrtko's Bosnia. The central part of the paper focuses on the verbal tradition about Ferhad-Pasha's most important endowment -Ferhadija Mosque in Banja Luka. Both, narrative poem and verbal tradition authentically convey the historically confirmed fact that on a battle-field in 1575 Ferhad Pasha captured Volf Englbert, the son of the captain of the Croatian Border-land and received 30.000 ducats for his release. This amount, inter alia, was used for building of the Ferhadija Mosque. Other details comprised by recorded poems and verbal tradition belong to the corpus of traditional and very commonly used themes and motifs. The verbal tradltion about building of the Ferhadija Mosque existed both among Muslims anci Christians Its encouragement could be sought in the early text about this event written by a Bosniak, Ibrahim-Bey Alajbegović Pečevi, a historian of the Ottoman Empire and Bosnia in particular.