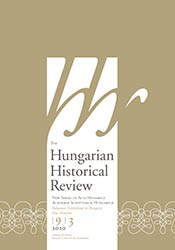 Summary/Abstract: New imperial history has fundamentally transformed our understanding of empires and questioned established certainties with regard to paths of state building and state formation. This challenge has proved fruitful for historians of Austria-Hungary, as it has led to a new perception of the Dual Monarchy as a sometimes innovative and in certain regards even progressive polity. The observation that nature and environment became more closely entangled with imperial rule and politics in the nineteenth century and had an impact on common notions of what modern empire actually was serves as a starting point for this study. Along three representative repositories of imperial knowledge—Czoernig’s Ethnographische Karte (1857), the Hungarian Czigányösszeirás eredményei (1893), and the catalogue accompanying one part (the Austrian) of the Habsburg contribution to the 1900 exposition universelle—it shows how new spheres of the non-human became entangled with imperial polities and were transformed into resources with which to further the imperial project. These three examples, I argue, are just three minor elements against a larger discursive backdrop that slowly furthered the embodiment of a notion of modern empire, which featured the improvement of the natural environment as a constitutive aspect of its exercise of power. Consequentially, this raises the question of a cui bono, placing the focus on a considerably large body of imperial civil service, not only in charge of this operation but also functioning as the driving force behind it. I understand the middle-class officials who made up the administration as the imperial intermediaries identified by new imperial history, and I shed light on the diversity of this increasingly important social class, a diversity which resulted from the ongoing engagement and subtle participation of middle-class civil-servants in the imperial project. I also keep a close eye on the resources they could mobilize, particularly expert knowledge. I seek to further a more nuanced understanding of the social transformation that Austria-Hungary’s imperial project underwent in the long nineteenth century as this distinctive polity (Austria-Hungary) relied on the middle classes as central imperial intermediaries who furthered the modernization of the Dual Monarchy by fostering specific sets of values and furthering the use of resources the appropriation and exploitation of which have left lasting marks in Central European mentalities.