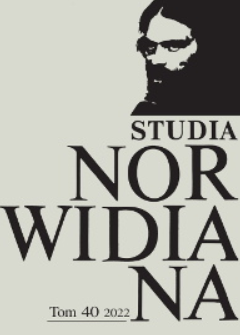 Summary/Abstract: Assunta is a digressive poem showing Norwid’s views on art, philosophy and religion. According to the aesthetic assumptions of Romanticism, art has its source in internal experience, religious experience, and is of a metaphysical nature. Modernist interpretations of Norwid’s works, to which the article was devoted, reveal its metaphysical aspects. Determining the direction and significance of influences becomes an extremely important task. The author of Assunta was perceived at the end of the nineteenth century as a patron of modernism, his name was mentioned together with that of Baudelaire, comments about him appeared in the context of discussions on modern literature, theater and the art of acting. Norwid’s work was in line with the „paradigm of sight-centricism”, the poet did not avoid optical metaphors, he used the poetics of chiaroscuro and space framing, which in Assunt’s poem gained a vertical character. The motives of improvement and growth played an important role in the piece. Reflecting on their meaning allowed to establish the rank of the metapoetic remarks contained in Assunta. The works of Norwid, recalled in the era of modernism, have received many interpretations, including critical ones, based on „troublesome” concealments. Zenon Przesmycki believed that this work was not fully understood, although attempts were made to include it in the aesthetics of modernism. However, it was recognized that it was the missing link in the development of Polish symbolist poetry (it is also worth emphasizing its links with „colorists” – as the Impressionists were called). In Assunta, referring to the Divine Comedy by Dante and Shakespeare’s Hamlet, the contemplative path of knowledge is shown. „Looking to heaven” is therefore a cognitive act in which reason coexists with faith.