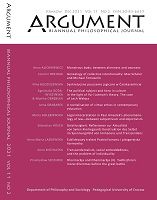 Summary/Abstract: The paper offers a close examination of the Mahābhārata’s adhyāya 5,70, one of the more interesting and representative chapters to analyse Yudhiṣṭhira’s attitude on the dharma of the king and warfare. In this long chapter addressing Kṛṣṇa (before the latter’s diplomatic mission to Kauravas), the king deprived of his kingdom presents two different attitudes. On one hand, he states that even though peaceful conflict resolution would be the best to regain the kingdom, the war must be accepted if it is inevitable. On the other hand, he expresses his disapproval of war as evil in any form (MBh 5,70.44-66). Yudhiṣṭhira’s ambivalent utterance is analysed against the background of early Buddhist ethics (as represented in the Pāli Canon), totally condemning war, and other passages from the Mahābhārata, especially those glorifying the dharma of kṣatriyas.