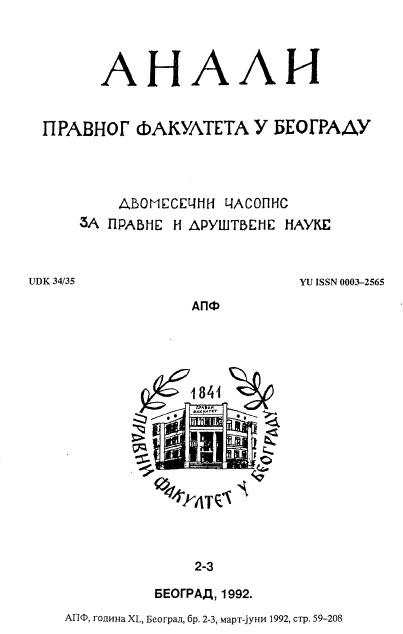 Summary/Abstract: In Roman law there exists a classification of property into res mancipi and res nec mancipi. The author studied this classification at the Albanian population in Kosovo and Metohia, where there still existed ancient forms of many legal institutes from the past. The above two kinds of property are found by the author to exist in the form of gjë dorëznari and gjë ipa dorezttari in Albanian folk law. A property (thing) is not a res mancipi according to its natural physical properties, but becomes such in the process of concluding, execu tin and protection of a firm contract, which is guaranteed by meand of the fides. And fides takes place by sponsoring and mancipatio. A sponsor is a free man who is responsible by pledging his life for the specific obligation relationship between the one transferring the right and the one acquiring it. He is the one preserving the fides (trust) between distrustful parties in the process of creation, execution and protection of every’ obligation. The sponsor is called in Albanian dorzon both in the procedure of concluding and of execution and protection of the contract. There exist in Roman law several terms concerning the same person depending on the function performed by such person: at the moment of conclusion, he is a sponsor, at the time of execution, he is a praes, while in his protective function he is called pretor. This custiodian of firm faith settles all disputes concerning the res mancipi. The trade in res mancipi is absolutely sure because the sponsor guarantees by his life for the obligation of the debtor. Mancipatio is a recommended form of the transfer of the property (thing): out of the hand of the one transferring it to the hands of the sponsor - in order for the latter to hand it over to the one acquiring it. Even today the Albanians effect the transfer of property through "three hands" (the one transferring - to zon - the one acuquring). This is a way of their protection against unilateral breaking of contract, non-fulfilment of the obligation stricti verbis, eviction and transforming the contract into a criminal offence. The phenomenon of res mancipi finds its origin in the tribal society, where a sponsor as a man of mutual trust, replaces the protection subsequently provided by the mechanism of state power. 'Гће procedure of sponsio and mancipatio prevents murders and blood revenge (vendetta) in distrustful tribal communities.