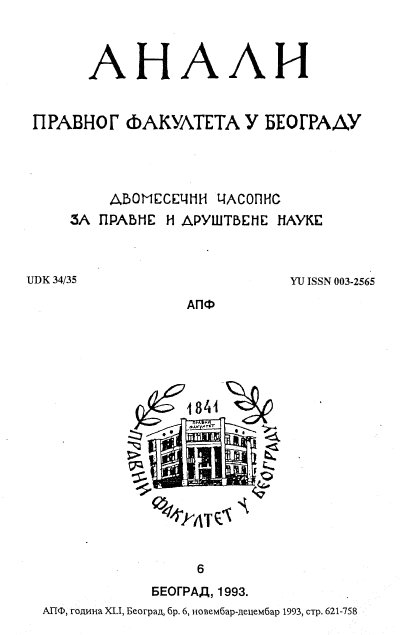 Summary/Abstract: According to the customary law, the Albanians may settle almost all their disputes by its rules. Contractual relations are settled by the so-called protectors ofword of honour, or "bessa" (Albanian term - dorzon, Roman law term - praetor), while the remaining property disagreements and those connected with wrongful acts are adjudicated by the councils of elders (Albanian -pleqnuia, Roman - conjuratore.s). Only the unchastity with women can not be settled either by protectors ofword of honour or councils of elders. Out of an unchast relationship a substituted successor may be set, who would kill his legitimate father and would usurp his property. The fear against such substituted successor compels Albanians to kill unchast men. In the structure of Al banian family it is possible to distinguish the members of three different layers: patrician, plebeian, and slavish. Patrician one includes masters of the households who are the ones ordering the execution of blood feud. They are not liable to the regular, state courts or the customary law courts. Plebeian layer encompasses men apt to carry arms and to engage in a war. They are direct executors of blood revenge as well as its victims. Plebeian layer is defended by household masters both at state and customary law courts. Women belong to the slavish layer. As a rule, they are not the executors of blood revenge of the victims thereof. Women are the motive for blood feuds. The unchast relationship as a real motive is concealed by other false motives and causes. Patrician layer presumes that its women are chast and that there is no reason for divorce. It does not pay off to divorce an otherwise bought woman. Mentioned courts accept false motives as formally existing and amounting to blood revenge. The issue is still open of criminal prosecution of the patrician layer in order to reveal the real causes and motives for murders and revenges with Albanians.