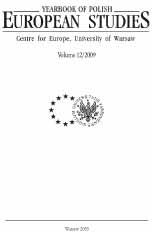 Summary/Abstract: On 1 May 2004 Poland became a member of the key principal organisation of countries of the old continent – the European Union. At the same time nine other countries entered the EU, including, from Eastern and Central Europe – Czech Republic, Slovakia, Hungary, Lithuania, Latvia, Estonia, Slovenia – and Cyprus and Malta from other regions. During the accession process Poland, being the largest of the candidate countries (in both territorial and demographic terms) and enjoying the support of the Federal Republic of Germany in the European integration process, was regarded by the ‘old EU’ Member States as the leader of the envisioned great round of enlargement. This way of perceiving our country could suggest that we were the principal political partner for the countries of the Eastern and Central European region and ‘head’ of the coalition of countries from the former socialist bloc, influencing the evolution of their international behaviour.