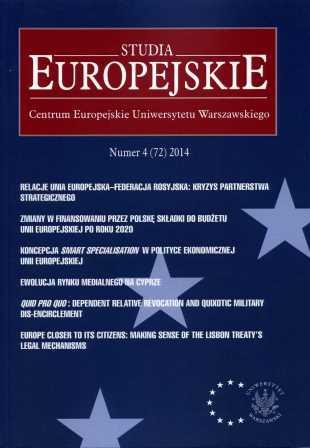 Summary/Abstract: The article presents the evolution of the media in Cyprus. The author outlines the short political history of the island, pointing out the lack of any cultural policy in Cyprus under Turkish rule. The British takeover of the island in 1878 was a turning point in this respect, with the first newspapers and magazines in Greek and English being published. The first press law was introduced in Cyprus in 1935 and was connected with the introduction of strict censorship, as the British were anxious about possible agitation for independence of the Cypriot Greeks. Regaining independence contributed to further evolution of the press market. In time, small family companies started disappearing, replaced by large media corporations. In 1990, the Cypriot parliament passed an act on press law that regulates the functioning of the press market and that has remained in force ever since. The article further presents the evolution of the radio and television media in Cyprus. The fi rst radio and television stations started functioning already under the British rule in the 1950s, but they experienced a boom only after the establishment of an independent Republic of Cyprus. In 1998, the Cyprus Radio-Television Authority was established to guarantee the observance of the principles of democracy as well as civil rights and freedoms in the media market. Furthermore, the article also presents the effects of the work on a Cypriot journalists’ code of ethics.