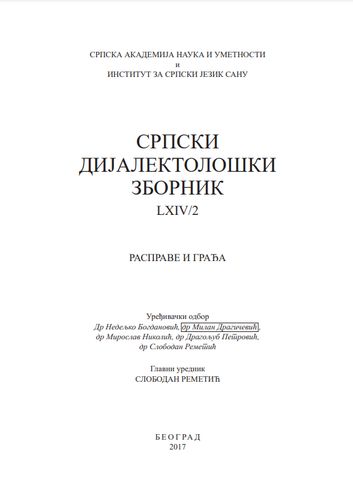 Summary/Abstract: The doctoral dissertation entitled The anthropological lexicon in the speech of the Svrljig area – a linguo-geographic approach deals with the study of the lexicon which is used to denote an individual based on his physical traits, in the speech of the Svrljig area. The term anthropogeographic lexicon refers to a lexicon used to denote an individual based on his features: physical features, social features, character. In the analysis of this lexicon, we selected an approach based on what is evident, and this primarily includes the physical features of individuals, that is, characteristics which the interlocutor can see (and/or hear) in contact with the individual in possession of these features. In order to obtain more precise results, we carried out the research in a very narrow geographic area – in the speech of the Svrljig area. A detailed analysis founded on relevant and extensive material, collected in the field, offered us the opportunity to use a linguistic perspective in order to view how a particular human community treats a certain part of the social reality – an individual and his physical features. The subject matter of this dissertation consists of more than 1600 nominal and adjectival lexemes of the Svrljig area, which can be defined as words which characterize an individual based on his physical features, and which belong to the semantic micro field of “physical features“, as a part of the semantic field “human traits“ and the associated field of “man“. The aim of this research was to isolate and study this lexicon, to organize an appropriate discussion, map the geographic distribution of certain lexemes and compile a dictionary. The determination of the semantic extent of lexical units which refer to the nomination and qualification of an individual has led to a more precise lexical image of the speech of the Svrljig area, but also to the understanding of the cultural identity of a single linguistic community. In a word, the formation of these lexical units is primarily based on visual perception (color, size, shape and the like). At the same time, their final form was also influenced by the socio-cultural specificities of the speech community which rested on the traditional human life values of people living in a rural environment. The volume and diversity of the nominations used to denote physical characteristics reflect a clear cultural specificity of the speech community in which everything that disrupts the ideal of a natural image and is not in accordance with the social norms is deemed negative. On the other hand, the number of positive and expressively neutral lexical units used to denote an individual with positive physical characteristics, as well as those which in no way deviate from the patterns of social norm, is negligible. A large part of this lexicon is represented by lexical units motivated by the name of a body part, but a significant percentage is made up of words which are the result of a metaphoric extension related to various entities from the environment, as well as lexical units based on a mythological semantic motivation. The derivational analysis included only those words which in synchronic terms can be considered derived words. The derivations obtained through prefixation and suffixation were analyzed as derivates which are the result of a complex-suffixation derivation process. Special attention was paid to suffixation as the basic and most widely available means of derivation. Suffixes were represented in combination with the base to which they were bound, and their productivity and meaning in terms of derivation were indicated. Lexical maps were used to represent the geographic distribution of ten selected lexemes. Since there is significant homogeneity on the lexical field, the differentiations between the Timok-Lužnice and Svrljg-Zaplanje speech are almost non-existent.