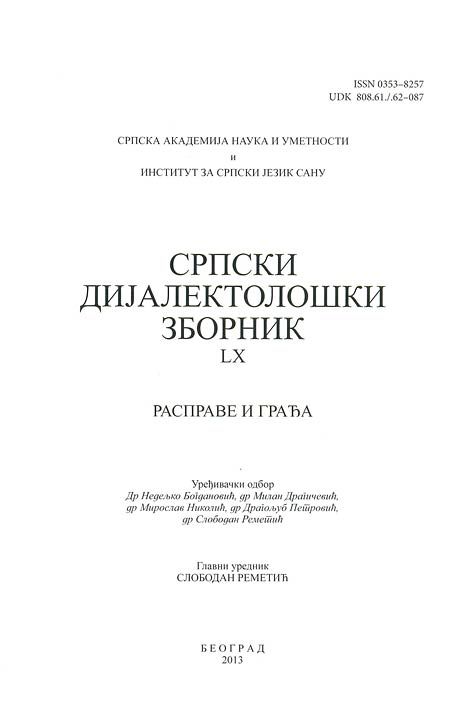 Srpski dijalektološki zbornik is the oldest linguistic journal of the Serbian Royal Academy, today’s Serbian Academy of Sciences and Arts. It was founded as early as 1905, when the famous study by Aleksandar Belić The Dialects of Eastern and Southern Serbia was published. It is the only national journal of this type in the Serbian cultural sphere. Thanks to the reputation of its editors (1905–1960 [Vols. I–XIII] Academician Aleksandar Belić; 1961–1974 [Vols. XIV–XX] Academician Mihailo Stevanović; 1976–1999 [2001] [Vols. XXI–XLVIII] Academician Pavle Ivić; 2002–2009 [Vols. XLIX–LI] Academician Aleksandar Mladenović; since 2010 [Vol. LVII] Slobodan Remetić, member of the Academy of Sciences and Arts of the Republic of Srpska) and the relevance and quality of the published studies, Srpski dijalektološki zbornik has gained the status of the most prominent dialectological journal in the Slavic world.

Seminal monographs (which, as a rule, flawlessly and in great detail describe phonetic, morphological, accentual and, less frequently, syntactic systems of individual dialects) on Serbian dialectology have been published on the pages of Zbornik. These include two books by Aleksandar Belić and four books by Pavle Ivić, dialect dictionaries, original research papers, book reviews, etc. The studies published in this journal have significantly enriched the doctrine of Slavic and European dialectology. Although originally focused on the studies related to the national context, Srpski dijalektološki zbornik has always had the status of an international journal.

After World War II (since 1950), the Institute for the Serbian Language became a co-publisher of this journal. Since 1976, Srpski dijalektološki zbornik has been published annually, and on several occasions, two issues were published in the same year.