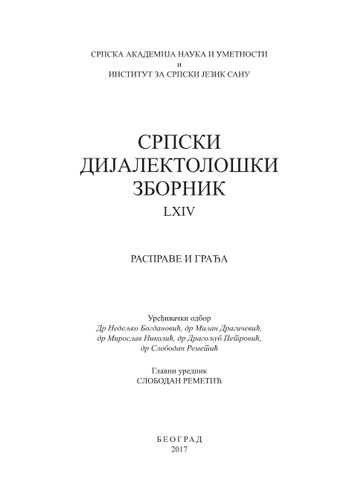 Summary/Abstract: The dialectical linguistic image of the world, realized in the main dialect language system, that is, the dialect characteristics functions within the framework of the national linguistic image of the world and represents a model of the naïve, traditional and unique understanding of the objective reality of a community. The specific nature of the understanding of reality manifested in the main dialect language system is most adequately verbalized in the lexicon and semantic structure of the dialectical lexicon. A dialect dictionary represents an authentic encyclopedia of the material and spiritual culture of a nation, since it is in the national words that we find the deepest and most completely expressed history of a national culture and the reflection of the national character. These factors are used to credibly complement the linguistic image of the world of a particular nation. The dialectical image of the world in this dissertation is represented by the lexicon of the Serbian speech of Prizren, taken from the Zbirka reči iz Prizrena (A Collection of Words from Prizren) compiled by Dimitrije Čemerkić, which makes up the basic lexical corpus for description of the lexical-semantic system of the Serbian speech of Prizren. The basic aim is the reconstruction of the linguistic image of the world of the Prizren community from the end of the 19th and first half of the 20th century. The anthropocentric nature of the linguistic image of the world has led to a methodological approach to the study of the Prizren lexicon, especially of the segment which is associatively and semantically related to man. The understanding of the concept of man from a lexical-semantic standpoint is highly compels and is mostly based on the theories of cognitive linguistics: conceptualization, the theory of semantic fields, prototype theory, etc. The analysis of the lexical units which characterize humans from the aspect of the physical, psychological and social require the pluralist approach. The structure of the dissertation is marked by the internal organization of linguistic elementsand their paradigmatic relations.Themainpart of the dissertation entitled A Lexicon of the Serbian Speech of Prizren represents a lexical-semantic analysis of the associative field of man. The paradigmatic part of the associative field of man is made up of linguistic elements unified in an invariant semantic sign ‘man’. The category schema ‘human characteristics’ integrates the nominal, qualifying and agentive corpus of lexemes whose referent man. The associative field based on the differential higher rank schemas has been divided into three lexical-semantic fields: the physical characteristics of man, the psychological characteristics of man (the lexical-semantic sub-fields of temperament, character, abilities) and the social characteristics of man. Each field represents an individual structure within the dissertation. The integral-differential semantic components within the filed function as a hyper-schema which incorporates elements into more narrow hierarchically organized paradigmatic groups - (subfields, lexical-semantic groups, lexical-semantic micro groups and micro rows). The method of reconstruction of the Prizren man from the end of the 19th and beginning of the 20th century using semantic fields and their subsystems represents a hierarchical principle of the organization of the dialectical lexical-semantic system and the input of the extra linguistic factors in the classification model of the lexicon using the arch schema ‘man’. The concept of man is the most differentiated in relation to the other cultural constants, since it is characterized and marked by numerous parameters, which further complicates the lexical-semantic paradigm. The bipolar principle leads to a dichotomous, symmetric nomination (male – female, positive – negative), while the poly-attributes lead to lexical variability and the formation of synonymy rows (contact synonyms, expressives, metaphor). The Prizren linguistic image of man is built out of verbal means which both at the external and internal level actualize authentic linguistic and extra linguistic elements characteristic for the given area and the particular epoch. Words which characterize man represent the essential elements used to reconstruct the way of life and model of understanding the world in a particular society.