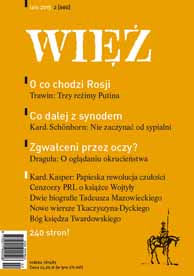 The WIĘŹ monthly was founded by a group of lay Catholics in the context of the thaw after October 1956. The first issue came out in February 1958. Its editor-in-chief was Tadeusz Mazowiecki, who later became the first non-communist Prime Minister of the Third Republic of Poland, 1989-90 (at present Mr Mazowiecki is the Chairman of the Editing Board of our monthly). As from 2013, the frequency is changed from monthly to quarterly. Since the beginning WIĘŹ has been involved in propagating and carrying out the programme of Vatican II Council: the programme of the Church understood as a community and open to the contemporary world. It is regarded as a monthly of great importance in the development of the Christian culture. WIĘŹ wants to participate in the creation of modern, critical but also orthodox Catholicism. It is a Catholic monthly of ecumenical character, open to the dialogue with those who seek, and very important for many non-believers. Every issue has a leading topic but, at the same time, more than half of the publication is devoted to diverse, high quality essays, poems, polemical texts, book and cultural reviews. We always publish a calendar of religious events in the world as well as commentaries of WIĘŹ editors on the most important current events. WIĘŹ co-operates with the most eminent figures of the Polish culture and the best Polish journalists. Every month we publish feuilletons by Julia Hartwig, sister Małgorzata Borkowska and Piotr Wojciechowski. But there is also space for young writers and debutantes. After Tadeusz Mazowiecki, WIĘŹ had the following editors-in-chief: Wojciech Wieczorek (1981-1989), Stefan Frankiewicz (1989-1995), Cezary Gawryś (1995-2001). At present, our editor-in-chief is Zbigniew Nosowski. People connected with WIĘŹ participate in the public life in Poland, in the world, and also in the life of the Church. The role of Tadeusz Mazowiecki in the transformations which took place in Poland and in Central-Eastern Europe has become symbolic. Wojciech Wieczorek, in 1989-90, was the Polish ambassador to Berlin, while Stefan Frankiewicz, in 1995-2000, was the Polish ambassador to the Holy See. Cezary Gawryś, in 1998-2003, was a Secretary at the Council of Ethics in the Media. Agnieszka Magdziak-Miszewska is the Polish Consul in New York. Andrzej Friszke is a member of the Board at the Institute of National Remembrance. Zbigniew Nosowki was a lay auditor at the Council of Bishops in 2001. Since 2002, he has been a Consulter of the Pontifical Council for the Laity. The Board of WIĘŹ is composed of outstanding experts in their fields of interest: Zbigniew Nosowski (editor-in-chief; religious and social-religious problems), Katarzyna Jabłońska (secretary; culture, film), Jacek Borkowicz (culture and nations in Central-Eastern Europe), Andrzej Friszke, PhD (contemporary history of Poland), Cezary Gawryś (reportage, problems of young people and education), Anna Karoń-Ostrowska, PhD (philosophy, contemporary culture), Paweł Kądziela (Polish literature), Józef Majewski, PhD (theology), Inka Słodkowska, PhD (sociology), Andrzej Szmidt (poetry), Tomasz Wiścicki (political issues).