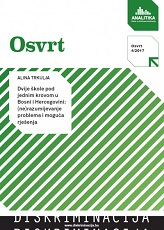 Dvije škole pod jednim krovom u Bosni i Hercegovini: (ne)razumijevanje problema i moguća rješenja
Two schools under one roof in Bosnia and Herzegovina: (mis) understanding of the problem and possible solutions

Author(s): Alina Trkulja
Subject(s): School education, Inter-Ethnic Relations, Ethnic Minorities Studies
Published by: Analitika – Centar za društvena istraživanja, sva prava pridržana
Keywords: ehtnic separation in schools;
Summary/Abstract: The focus of the work are the so-called "Two schools under one roof", currently 34 such in two cantons of the Federation of Bosnia and Herzegovina (hereinafter FBiH), Herzegovina-Neretva (HNK) and Central Bosnia (SBK), according to which students attend classes in two schools within one school building, separated by ethno-national affiliation, often with a ban on "mixing". Here, segregation and even discrimination in schools are more clearly seen, but in areas of BiH with a dominant ethnic majority, although it should be noted that the latter are not immune to them either. Because, as simplistic as it may sound, Bosnia and Herzegovina essentially has three types of schools3 and three school systems or “three schools under one roof”. // The aim of this analysis is to map current practices in education in BiH from the perspective of language and identity, as well as to identify dominant concepts and models for solving the problem of divided education operated in political and expert platforms and initiatives in this area, and critically evaluate them. in accordance with the principles, values and goals of education established by the international human rights framework and the state legal framework. About this practice, with emphasis on the attitudes of teachers, parents and students, several major studies have been done so far, the conclusions of which are the starting point and basis for the analysis of proposed models of education.5 Relevant international standards and laws were used as primary sources. and strategic documents in BiH. From secondary sources, books, academic and media articles and reports, as well as media appearances of relevant actors and experts in the field of education were consulted. Through interviews with experts and decision-makers at various levels, primarily representatives of the OSCE and relevant ministries of education, but also through a number of sources on shared education, the currently dominant model proposals for overcoming identified problems and achieving fairer, inclusive and intercultural education were identified and analyzed.