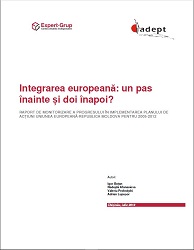 Author(s): Igor Boțan, Denis Cenușa, Mariana Kalughin, Adrian Lupuşor, Iurie Morcotilo, Polina Panainte
Subject(s): National Economy, Welfare services, Economic development, EU-Accession / EU-DEvelopment
Published by: EXPERT-GRUP Centrul Analitic Independent
Keywords: Democratic institutions; Transnistria conflict; capacity of administration; juridical system; economic reforms; foreign trade; social development; migration; border control;
Summary/Abstract: The Progress Report presents an analysis of how the Moldovan authorities have achieved the objectives set for the political, economic and institutional rapprochement with the European Union. The study includes the monitoring of the period from the signing on February 22, 2005 of the European Union - Moldova Action Plan, an exhaustive strategic planning document for the implementation of the Partnership and Cooperation Agreement (PCA), until the signing in 2014 of the Association Agreement between Moldova and the EU, which also includes the creation of the Deep and Comprehensive Free Trade Area (DCFTA). In the reference period, 2005-2014, the most important progress is related to the fulfillment of the political, institutional and economic conditions for the signing of the Association Agreement and the liberalization of the visa regime with the EU. Significant progress has been made in the area of respect for human rights, ensuring e-government, reforming the information technology and social services sector. Against this positive background, important shortcomings have been noted in a number of areas, in particular in the fight against corruption, in the banking sector, in the implementation of EU quality standards and in the energy sector.