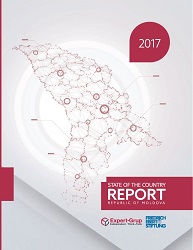 Author(s): Adrian Lupuşor, Alexandru Fală, Ana Popa, Denis Cenusa, Iurie Morcotilo
Subject(s): National Economy, Social development, Family and social welfare, Economic development
Published by: EXPERT-GRUP Centrul Analitic Independent
Summary/Abstract: Moldova’s state of the country has worsened against the background of a number of exacerbating systemic vulnerabilities. The development prospects of the country are challenged by a series of economic, social and demographic constraints. From the economic point of view, the growth proved to be slow and unsustainable, implying the erosion of GDP potential and competitiveness. Moreover, the economic growth did not materialize in meaningful improvements in the wellbeing of the population, given the decline in formal employment and increase in informal one, which created challenges from the social point of view. The demographic challenges are related to poor capacity of the economy to integrate the largest cohort of the population with an age profile of around 30 years, which gradually leads to losing the opportunity to explore the benefits of the demographic dividend. // The internal (geo)political struggles and frequent controversial legal initiatives have worsened the internal systemic vulnerabilities. The period 2016–2017 was marked by the fact that the presidency, along with the left-wing parliamentary opposition party, intensified the Russian factor, which made the society and business environment confused about the country’s European orientation. This feeling was intensified by the slow pace of reforms and even by actions that distanced Moldova from the EU association agenda, promoted by the ‘pro- European’ Government. These actions included a number of legal initiatives heavily criticised by a large part of civil society and most of the development partners (i.e.: the law on ‘fiscal and capital amnesty’, modification of the electoral system, an initiative to limit non-governmental organisations’ access to external financing, low transparency in electricity procurement and others). These slippages and the tactical struggles (sometimes, even partnerships) between the ruling party and the left-wing parliamentary opposition party have fostered even more the deficit of trust in the Government by citizens, business entities and development partners. As a result, investments have fallen and the financial support from development partners is uncertain (particularly after the approval of the mixed voting system and the failure of reforms in the areas of justice and anti-corruption). Moreover, the reform process is also undermined by the low level of public legitimacy of the current Government: surveys show a low level of electoral support for the ruling party, which is close to the electoral threshold.

Series: STATE OF THE COUNTRY REPORT