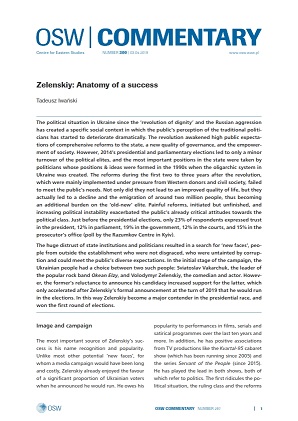 Author(s): Tadeusz Iwański
Contributor(s): Jim Todd (Translator)
Subject(s): Government/Political systems, International relations/trade, Politics and society, Social development, Migration Studies, Sociology of Politics, Geopolitics
Published by: Ośrodek Studiów Wschodnich im. Marka Karpia
Keywords: Volodymyr Zelensky; Ukraine; politics; reforms; governance; development of the state; migration of Ukrainians; presidential elections;
Summary/Abstract: The political situation in Ukraine since the ‘revolution of dignity’ and the Russian aggression has created a specific social context in which the public’s perception of the traditional politicians has started to deteriorate dramatically. The revolution awakened high public expectations of comprehensive reforms to the state, a new quality of governance, and the empowerment of society. However, 2014’s presidential and parliamentary elections led to only a minor turnover of the political elites, and the most important positions in the state were taken by politicians whose positions & ideas were formed in the 1990s when the oligarchic system in Ukraine was created. The reforms during the first two to three years after the revolution, which were mainly implemented under pressure from Western donors and civil society, failed to meet the public’s needs. Not only did they not lead to an improved quality of life, but they actually led to a decline and the emigration of around two million people, thus becoming an additional burden on the ‘old-new’ elite. Painful reforms, initiated but unfinished, and increasing political instability exacerbated the public’s already critical attitudes towards the political class. Just before the presidential elections, only 23% of respondents expressed trust in the president, 12% in parliament, 19% in the government, 12% in the courts, and 15% in the prosecutor’s office (poll by the Razumkov Centre in Kyiv). The huge distrust of state institutions and politicians resulted in a search for ‘new faces’, people from outside the establishment who were not disgraced, who were untainted by corruption and could meet the public’s diverse expectations. In the initial stage of the campaign, the Ukrainian people had a choice between two such people: Sviatoslav Vakarchuk, the leader of the popular rock band Okean Elzy, and Volodymyr Zelenskiy, the comedian and actor. However, the former’s reluctance to announce his candidacy increased support for the latter, which only accelerated after Zelenskiy’s formal announcement at the turn of 2019 that he would run in the elections. In this way Zelenskiy become a major contender in the presidential race, and won the first round of elections.