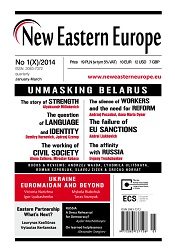 Summary/Abstract: After the First World War, Poland once again became an independent state. The Treaty of Versailles not only guaranteed Polish independence, but also granted Eastern Galicia – an area that had a strong ethnic Ukrainian population – to Poland. Throughout the interwar period, Poland passionately debated how to deal with this five million-strong minority, which at the same time attempted to build its own state.