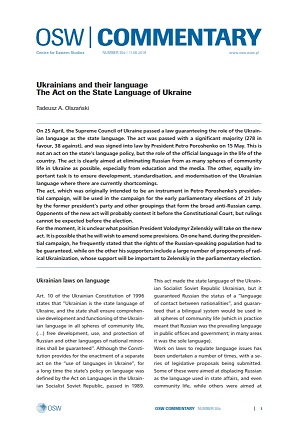 Author(s): Tadeusz A. Olszański
Contributor(s): Jon Tappenden (Translator)
Subject(s): Public Law, Sociolinguistics, Government/Political systems, Politics and society, Philology, Sociology of Politics, Politics and Identity
Published by: Ośrodek Studiów Wschodnich im. Marka Karpia
Keywords: Ukraine; Ukrainian language; state language; act; law; eliminating Russian language; politics; anti-Russian campaign; Ukrainization;
Summary/Abstract: On 25 April, the Supreme Council of Ukraine passed a law guaranteeing the role of the Ukrainian language as the state language. The act was passed with a significant majority (278 in favour, 38 against), and was signed into law by President Petro Poroshenko on 15 May. This is not an act on the state’s language policy, but the role of the official language in the life of the country. The act is clearly aimed at eliminating Russian from as many spheres of community life in Ukraine as possible, especially from education and the media. The other, equally important task is to ensure development, standardisation, and modernisation of the Ukrainian language where there are currently shortcomings. The act, which was originally intended to be an instrument in Petro Poroshenko’s presidential campaign, will be used in the campaign for the early parliamentary elections of 21 July by the former president’s party and other groupings that form the broad anti-Russian camp. Opponents of the new act will probably contest it before the Constitutional Court, but rulings cannot be expected before the election. For the moment, it is unclear what position President Volodymyr Zelenskiy will take on the new act. It is possible that he will wish to amend some provisions. On one hand, during the presidential campaign, he frequently stated that the rights of the Russian-speaking population had to be guaranteed, while on the other his supporters include a large number of proponents of radical Ukrainization, whose support will be important to Zelenskiy in the parliamentary election.