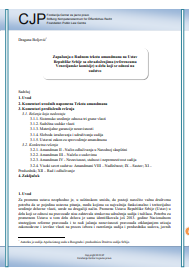 Author(s): Dragana Boljević
Subject(s): Law, Constitution, Jurisprudence, Constitutional Law, Public Law, Evaluation research
Published by: Fondacija Centar za javno pravo
Keywords: Serbia; Constitution; changes; draft amendments; judiciary; Venice commision; observations;
Summary/Abstract: The Republic of Serbia has itself committed to amending of the Constitution as far back as 2013 by adoption of the National Judicial Reform Strategy, subsequently by adoption of the Action Plan for Chapter 23 on 23 April 2016 for the purpose of strengthening the independence of the judiciary. The Ministry of Justice has, mid 2017, initiated an informal consultative process, while not offering an official stance of the State regarding the future Constitutional solutions, and on 22 January 2018 published the Working Version of the Draft Amendments to the Constitution. The process itself was led with absence of a proper debate or even dealing with the topic of strengthening of the judiciary which was the reason for change of the Constitution, and included scorn, even threats to the participants, as well as to judges and public prosecutors in general, for which reason many associations decided not to participate in the verbal debate any longer. At a first glance, the proposed solutions correspond to the suggestions from the 2007 Opinion of the Venice Commission regarding the Constitution of the Republic of Serbia and recommendations of the European Union introduced into the Action Plan for the Chapter 23: the so-called probationary appointment of judges to a three-year mandate in the National Assembly is abolished, conditions for termination of office of a judge is raised to the Constitutional level, the High Judicial Council is entrusted with selection and termination of office of all judges and presidents of courts while from its composition, at least formally, the Minister of Justice and president of the Committee of the National Assembly for the Judiciary are removed. Working Version of the Amendments does not mention any of the numerous Opinions the Venice Commission gave regarding the legal acts of Serbia; it does not contain any or it does not contain adequate explanation; those provided however do not make reference to any international standards, but only to one of Venice Commissions’ reports from 2007, and to individual, taken out of context, parts of Opinions regarding legal acts of Armenia, Georgia, Albania, Montenegro, which do not contain general positions but are related to specific proposals of solutions in special socio-historical situations of particular countries with different legal traditions; from the provided reasons, one cannot see why a specific solution was proposed, out of many possibilities, and whether it is the most optimal solution for organization of the judiciary in the Republic of Serbia. In terms of content, the Ministry of Justice has neglected the Legal Analysis of the Constitutional frame in the Republic of Serbia from 2014, which has been accepted by the whole of the judiciary, and proposed contrary solutions instead. The Judicial power remains undefined and systemically unarranged, material guarantees of the independence of the judiciary are still lacking, as are the right of judges to professional gathering and their freedom of expression of opinion. The Amendments relocate the influence of the legislative and executive to the Judicial Academy (which by means of selection of attendees in fact substantially selects judges) and to the ruling political majority since they undermine the High Judicial Council and turn it into an instrument of the parliamentary majority, which is set to decide on all matters that are the most important for the judiciary. The current constitutional guarantees of the independence of the judiciary (by omitting the current prohibition of any political influence on judge in performing the judicial function, by providing the Minister with the authority to commence a disciplinary proceeding and a procedure of dismissal of a judge, and by introduction of judicial practice as a source of law), immovability of a judges (by allowing movability of a judge irrespective of their will in any situation of “reorganization of the judicial system”) are all being diminished while incompatibility of the judicial function with other functions or jobs is defined broadly and imprecisely (incompatibility with a “private” function will allow for prohibition of professional gathering of judges). All in all, the proposed solutions do not remove, but increase the scope for political influence to the judiciary.

Pregled dešavanja u pravosuđu Srbije Snapshot of Events in Serbian Judiciary 2012 Zapažanja o Radnom tekstu amandmana na Ustav Republike Srbije sa obrazloženjima (referencama Venecijanske komisije) u delu koji se odnosi na sudstvo Observations regarding the Working Version of the Draft Amendments to the Constitution with explanation (references of the Venice Commission) regarding the part pertaining to the judiciary 2018 Osporavanje legitimiteta sudske vlasti u procesu ustavnog uređenja nezavisnosti sudstva na primeru Srbije Challenging the legitimacy of the judiciary in the process of constitutional regulation of the independence of the judiciary on the example of Serbia 2020
2022 © CEEOL. ALL Rights Reserved. Privacy Policy | Terms & Conditions of use
ICB - InterConsult Bulgaria core ver.2.0.1201