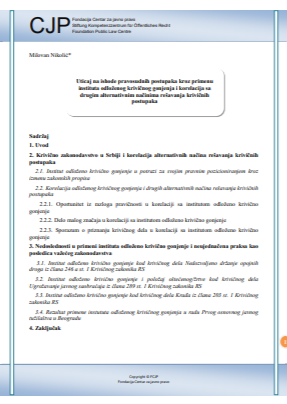 Author(s): Milovan Nikolić
Subject(s): Law, Constitution, Jurisprudence, Criminal Law, Public Law, Evaluation research
Published by: Fondacija Centar za javno pravo
Keywords: Serbia; criminal law; criminal proceedings; influence; institute of delayed prosecution;
Summary/Abstract: Of all alternative ways of ending criminal proceedings, the institute of delayed prosecution and the agreement on the recognition of the criminal offense have the most significant effect on the completion of judicial proceedings. Consequently, it is necessary for it to be accompanied by appropriate legal solutions that must meet two basic objectives. In addition to retaining a high degree of implementation in practice and enabling the future increasingly massive use of these alternative institutes, it is now imperative to specify more precisely the criteria that will limit this public prosecutor's discretionary power. At the same time, the introduction of two-step decisionmaking, and thus giving greater importance to protect the position of the injured party, by recognizing all the attributes of the victim, as well as forcing prosecutors to explain the justification and urgency of the application of opportunties and other alternative ways of solving criminal procedures with much more „passion”. Pointing to numerous objections in the application of the institute of delayed prosecution, I did not intend to question its criminal-political justification, but to draw attention to the importance of (un)quality opportunistic legislation and the meritory power of the prosecuting prosecutors in the alternative ending of judicial proceedings. The coexistence of these factors must, as a result, have even more extensive application of alternative institutes, with particular reference to the many opportunities and agreement mentioned above, but not that the key defects and imprecision of the legal text are not the key contribution to such implementation. Successful implementation of these relatively new institutes of criminal procedural legislation will be primarily contributed by the necessary education of professional staff, as well as the introduction of the public about their meaning, significance and advantages. I am convinced that at that time, statistical data will not only represent evidence of the extremely frequent application of alternative institutes, but will reflect the overall social satisfaction expressed by procedural but as far as possible the just termination of criminal proceedings.